Leonardo da Vinci’s painting of the Last Supper is said to be worth $450 million. However, it’s tricky to put a price tag or worth on the Last Supper as it is one of the most iconic artworks in the world. Moreover, the painting has never been sold, and hence there has been no benchmark created to estimate its value.

Read on to learn more about the Last Supper’s worth, its hidden symbolism, and what it is about the painting that makes it so valuable.

How Much is the Last Supper Worth?

While the painting’s worth is entirely unknown, the last supper is estimated to be worth $450 million. That’s when compared to the actual sales prices of other rare da Vinci paintings. Leonardo’s masterpiece is believed to attract such a hefty valuation due to a combination of the following factors:

The Last Supper’s Representation of Successive Moments in Time

The painting shows Jesus’ last meal with his disciples before being arrested and crucified. It’s da Vinci’s visual interpretation of an event chronicled in the four Gospels. However, unlike other artists’ depictions of the Last Supper, which portray a more stoic scene, Leonardo wanted to capture precisely the instant after Jesus told his disciples that one of them would betray him.

Thus, da Vinci’s painting depicts the successive reactions of rage, horror, and shock from the apostles.

For instance, Philip, who’s standing to Jesus’ left, gestures towards himself and probably says, “Lord, it’s surely not me.” Jesus replied that the disciple who dips his hand in the bowl was the betrayer. Simultaneously, Jesus and Judas seem to reach toward the dish on the table, making him the betrayer.

The Birth of Eucharist (Holy Communion)

The Holy communion is a fundamental aspect of the modern church. In da Vinci’s interpretation, the painting depicts moments just before the birth of the Eucharist. Jesus is seen gesturing towards a piece of bread and glass of wine, suggesting the establishment of the rite of Holy Communion, while he gives clear guidance on how to eat and drink the bread and wine in the future.

The Miraculous Survival of the Last Supper

Unfortunately, Leonardo’s Last Supper painting hasn’t stood the test of time undamaged. Even before finishing it, there were issues with the paint falling from the wall, and the painter had to repair it. Moreover, over the years, the painting of the Last Supper has crumbled, been vandalized, bombed, and restored multiple times.

Therefore, the survival of the painting is seen as something of a miracle. Today, centuries later, viewers can appreciate the stunning artwork thanks to several restorations and a bit of divine luck.

Speculations about the symbolism in the painting are plentiful. For instance, some scholars have argued about the meaning of the spilled salt container near the character believed to be Judas’ elbow. Spilled salt may symbolize religion, loss, or Jesus as the salt of the earth.

The spilled salt before Judas is also said to represent his betrayal. Alternatively, it can be seen as a sign of bad luck as being the one chosen to betray Jesus.

Da Vinci’s choice of food in the painting has also been highly debated for years. Viewers dispute whether the fish on the table is eel or herring. In Italian, eel is aringa, but when spelled arringa it implies indoctrination. In the Northern Italian dialect, herring is renga and is used to describe someone who denies religion. That would fit the biblical prediction of Jesus about his apostle Peter denying knowing him.

Moreover, the Last Supper painting has inspired some wild theories. For instance, the book Templar Revelation (Amazon) indicates that the figure to Jesus’ left isn’t John as many believe but actually Mary Magdalene. It argues that the painting is indisputable evidence in the cover-up of the identity of Jesus by the Roman Catholic Church.

Musicians throughout the years have proposed that there is a hidden message in the artwork by means of an accompanying soundtrack. In fact, in 2007, Giovanni Maria Pala, an Italian musician, created 40 sec of a melancholy song using notes believed to be encoded within the distinctive composition.

Furthermore, Vatican researcher Sabrina Galitzia translated the artwork’s astrological and mathematical signs into a message from the painter about the end of the world. She claims that the painting predicts an apocalyptic flood that will sweep the world from March 21 to November 1, 4006.

What’s The Medium Used in The Last Supper?

Da Vinci preferred oil painting, a medium that allows you to work slowly while making changes with ease. In addition, he sought more luminosity and intensity of shade and light than could be achieved using fresco.

However, Da Vinci painted the Last Supper on a wall (rather than on a canvas) sealed with a double layer of gesso, mastic, and pitch. He then borrowed from panel painting to add an undercoat of white lead that enhanced the oil paint and tempera brightness applied on top.

The piece is said to be famous and worth so much because da Vinci hadn’t ever worked on such a large artwork and had no experience in the traditional mural medium of fresco. Instead, the Christian art was created using experimental pigments on the dry plaster wall, and the technique is believed to have been riskier than the conventional fresco painting popular at the time.

Where Can You View the Last Supper Painting?

Unlike other iconic paintings, the last supper isn’t found in a museum. Instead, its permanent home is a Dominican convent in Milan, Italy, and moving it would be nearly impossible. That’s because da Vinci painted the work directly and fittingly on the refectory (dining room) wall of the Santa Maria Delle Grazie convent in 1495.

To visit the church and see the original painting of the Last Supper with your own eyes will require that you make a reservation well-in-advance as tickets are very limited. It’s also possible to see the painting as part of a tour group or with a private guide.

How Much Are Copies of The Last Supper Worth

According to Wikipedia, two early copies of the painting are known to exist. The copies, which are almost the original size (the original is 15 feet by 29 feet), are presumed to be Leonardo’s assistants’ work.

One by Cesare da Sesto is in the Church of St. Ambrogio in Ponte Capriasca, and the other by Giampietrino is found in the Royal Academy of Arts. 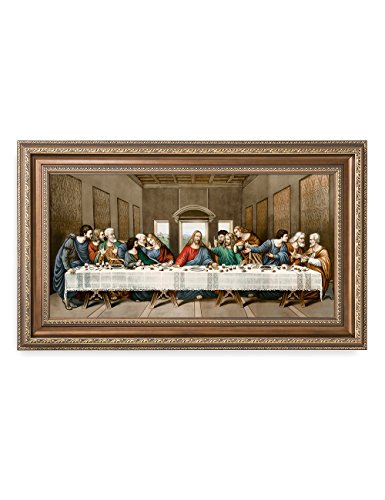 You can get your own reproduction of one of Leonardo da Vinci’s greatest works here on Amazon.

According to the Wall Street Journal, modern-day artist Zeng Fanzhi created his own version of Leonardo’s Last Supper painting which was sold for $23.3 million at a Sotheby’s auction in 2013.