Bob Ross, whose full name was Robert Norman Ross, was an American artist, art instructor, and T.V. host. He was one of the most delightful people in the industry during his time. The soft-spoken, bushy-haired painting instructor who didn’t make mistakes, only “happy accidents”, stole viewers’ hearts through the PBS TV show that aired from 1983 to 1994. So, how much is Bob Ross worth?

At his time of death in 1995, Bob Ross had a personal net worth of $1 million. That doesn’t include his name value, likeness, and artwork collection, which would later prove to be worth several millions of dollars. Today, Bob Ross Inc. is estimated to be worth $10 million.

It’s unfortunate that Ross died at the height of his career. Even so, let’s look at Ross’ worth today as well as his career rise.

How Much Is Bob Ross Worth?

According to Celebrity Net Worth, Bob Ross had an estimated net worth of $1 million at the time of his death. While it’s been decades since he died, Bob continues to be an omnipresent force in American culture. His images are used in coloring books, clothing, puzzles, and his show is still on Hulu.

Bob Ross’ Net Worth and Career

According to his Biography, Bob dropped out of high school in his freshman year and later joined the U.S. Air Force. He began his service as a medical records technician and was promoted later to master sergeant. He performed the first sergeant duties at Eielson Air Force Base in Alaska. He was a member of the U.S. Air Force from 1961 to 1981. 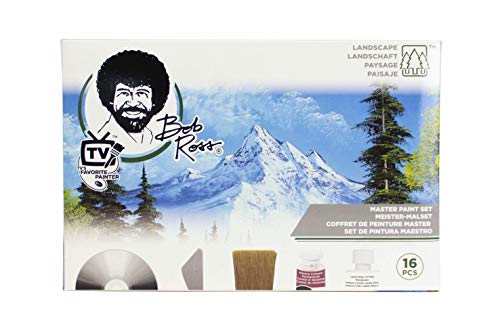 Paint your own happy little tree by getting the Bob Ross Master Paint Set at Amazon.

While serving in the military, Bob Ross began watching shows such as The Magic of Oil Painting that he found inspirational and prompted him to explore new painting techniques. The show’s host, Bill Alexander, used a 15th-century technique called Alla prima, which simplifies the art of painting. The method, also known as wet-on-wet, entails applying oil paint on the canvas without waiting for the previous layer applied to dry.

Consequently, you can finish an original painting in as little as 30 minutes. Bob Ross utilized the technique to make several paintings of landscapes containing glorious Alaskan mountains and snow. He sold some of these paintings to tourists making a small fortune as a result.

He is also said to have attended different art schools, including the some available through the Anchorage U.S.O. club, to perfect the wet-on-wet technique. Bob began teaching the skill to his peers and eventually landed his T.V. show.

The Joy of Painting – Bob Ross

American painter Bob Ross’ painting series, the Joy of Painting, became a worldwide phenomenon after it premiered in 1983. Armed with a reassuring tone and calm demeanor, Bob simplified the art of painting for his vast loyal audience and became a favorite television host among viewers.

While it’s estimated that only 3% of fans painted along, many watched the show to hear his inspiring words and gentle humor. The show also aired in Europe, Canada, and Latin America.

His nature earned him a unique space in pop culture after his image was featured in the movie Deadpool 2 and the television show Family Guy. Besides, some of the episodes of the show became part of the Beauty Is Everywhere Netflix show. The Joy of Painting has been added to his YouTube Channel, where it has garnered millions of views. 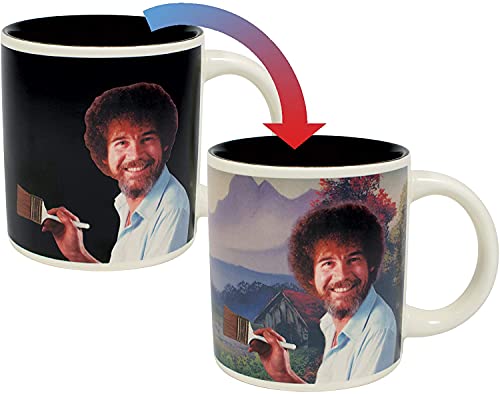 Check out the Bob Ross Heat Changing Mug at Amazon

The Painter’s Rise to Fame and Money – Bob Ross

At the peak of the show, it aired on over 90% of American public T.V. networks and garnered millions of views each week. While Bob appeared on the show for free, he used this platform to promote his painting kits and books. As a result, he sold about $20 million worth of books, art kits, and videotapes in his lifetime.

Ross used the T.V. fame to build a $15 million business, the Bob Ross Inc. that he frequently promoted on the show. It’s estimated that he did at least 30,000 pieces of art in his career, some of which were later sold for as much as $10,000.

Thanks to his imagination, conceptual ideas, and technical skills, he was able to create thousands of paintings that have remained classics to this day. These happy little masterpieces can be found in Bob Ross Inc. in Herndon, Virginia.

Why Are Bob Ross’s Paintings So Scarce in the Market?

As Bob’s T.V. career grew, he started a company as a humble joint business with his wife Jane and Annette Kowalski, one of his students. The company mirrored the painter’s success and branched into a line of art supplies and into a school, where Ross trained artists. It eventually became a $15 million business.

As the company terms stipulate, the death of a company partner resulted in their share being split between the remaining partners. But the Kowalskis are said to have been hungry for Bob’s stock.

As his health deteriorated, the Kowalski’s approached the famous painter to hand over his estate to them. This prompted Ross to write Kowalski out of his will, forwarding it to his son Steve and half-brother Jimmie Cox.

The Kowalski’s argued that Ross’ achievements were under the company’s ownership. So that made it their property. The Kowalski’s ultimately won in court and they became the sole owners of Bob Ross, Inc after Bob’s death.

A Netflix documentary detailing the whole saga was released in 2021. 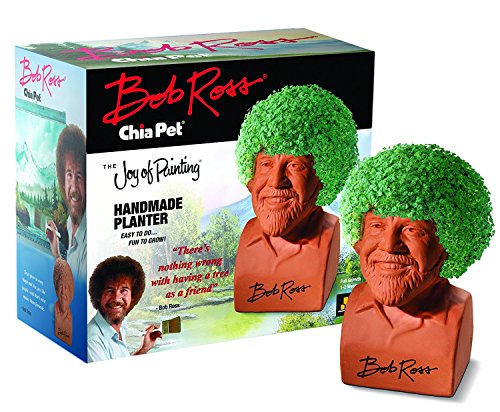 Get the Chia Pet Bob Ross at Amazon

Ironically, Ross maintained an optimistic and lively demeanor towards everything, and the battle for his empire has been something completely opposite of who he was as a person.

Because of all of the legal drama, Bob’s paintings are very difficult to find anywhere in the art market today. Bob painted over 1,100 pieces throughout his career, but Bob Ross Inc. owns all of the rights and hasn’t released them to be sold.

While they sit on a good amount of money, Bob Ross Inc President Joan Kowalski says Bob didn’t create the paintings to be sold. Instead, he made them to showcase his skill and technique and to market his painting supplies.

However, theoretically, if the art pieces were to be sold, it’s expected that they’re worth around $12 million (assuming each sells for $10,000).